– To the German version 🇩🇪with protocol + pictures in the overview, see "Alle Aktionen" –

… facing the climate crisis you‘re in for a huge pile of responsibility – the responsibility to raise awareness. In order to cope with this challenge with the necessary urgency and consistency, we need all of you.

Our ecosystems are dying far too quietly

Only reporting in the margins of the environment or science department will not meet the need. The worldwide climate emergency is real, the scientific community agrees: If we don act immediately and reduce emissions, heat, storms, forest fires and ice melting will turn a considerable amount of our earth uninhabitable. Wars over food, water and land are looming on the horizon.

Led by science, journalists described the covid-19 pandemic as an emergency, pointed out it‘s devastating consequences, condemned disinformation and explained, how we can protect ourselves. We need the same commitment and dedication for biodiversity and climate reporting! And here time is of the essence as well.

Call the crisis a crisis!

Why „emergency“? Because words matter and shape our perception! Instead of trivialising, talking about “climate change”, we should resolutely use the terms “Climate Crisis” and “Climate Catastrophe”. International media, such as The Guardian, already issued a common language guideline about the Climate Crisis. The initiative “Covering Climate Now” put together 10 points, that journalists can bear in mind.

Point out the interconnections!

The Climate Crisis is happening right now. On our doorstep. It is not a future crisis or a problem of far away countries, even though people there are affected much worse today. The more frequent occurrence of pandemias, drought, natural disasters due to the Climate Crisis and the Ecological Crisis are still getting far too little attention.

Various social, economical and political topics such as traffic, consumption, use of resources, factory farming, the energy sector or industry should categorically be considered in the context of the Climate Crisis. The Corona pandemia showed us, that profound changes and measures will be accepted, if they are being explained properly! This is why we need inter-departmental research teams about the Ecological and Climate Crisis!

Facts are not an opinions!

In German media, reports on the Climate Crisis and the loss of biodiversity often appear in the form of opinion pieces. But it’s not a way of thinking, an ideology or interest of certain parties, because facts are not opinions. The commitment of journalists, politicians and scientists for the climate and a social transformation should not be called “activism”. Instead we have to show, that we have to act urgently! Biodiversity researchers and climate scientists need to get a stage just as the industry’s CEO’s – if not a bigger one.

Reporting as neutrally as possible is one of the foundations of journalism. But the editors often believe that they’re obliged to make a false balance. For example scientific arguments and business interests are being presented as equal positions or statements of politicians are not being categorised. Protests of the Climate Movement are being covered, but not the content or reasons for the protest or the claims. Especially in Germany, the Climate Crisis is shown as a topic for technology enthusiasts and innovation. But this is trivialising the topic, instead of raising awareness. Purely technological solutions will not save us! In the end it’s all about emissions.

Ask about the budget!

It is one of the most unpleasant questions today – the global rise in temperatures is dependent on the green house gases we are emitting. The Paris Climate Agreement draw a line for 1.5°C or 2°C at most. This amount of heating is already devastating, but it will probably give us a chance to survive. The remaining emission budget to reach the 1.5°C goal, is very small. All the German political parties are skiving off announcing a definite emission budget, because then we’d have to realise how negligent we’ve been and what great challenged we are facing. While we’re daily being informed about Corona case and incidence numbers, definite emission budgets and their breakdown are getting far less attention.

The good news is: There is a lot to do. We need all departments, the most different perspectives and skills. Let’s lend an ear to science, put the Climate Crisis on the front page! Thank you for your support!

– Sara Schurmann in an open letter to her colleagues

Photos of the actions

You'll find them in our Public Press Pool, which will fill up over the next day.

There's a subfolder with english copy. 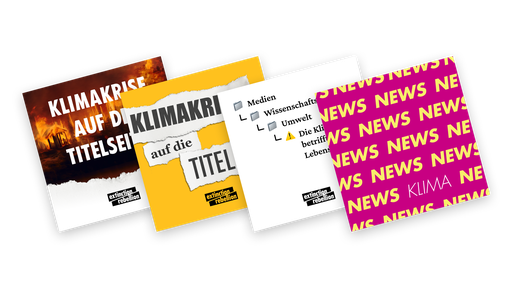 Back to the German version 🇩🇪with protocol + pictures in the overview, see "Alle Aktionen".