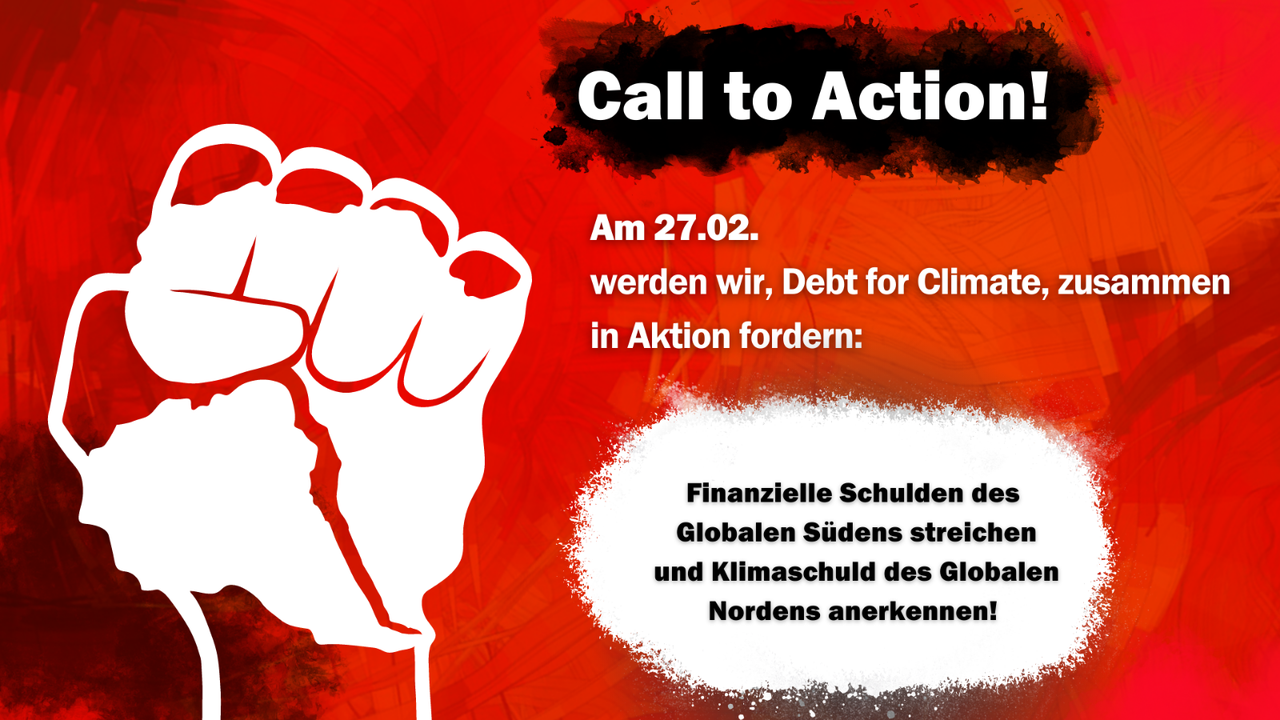 Was passiert in Berlin?

On 27.2. “Debt for Climate” will demand in action: cancel financial debt of the Global South and recognize climate debt of the Global North! This date marks the 70th anniversary of the cut of Germany's debt after World War II, which helped Germany achieve its "Wirtschaftswunder."

- Speeches by MAPA activists (Most Affected People and Areas).

How can I participate?

“Debt Cancellation - Possible for Germany in 1953, not possible for the Global South today?!”

February 27th will be the next big global action day of Debt for Climate. We (Debt for Climate Germany) have big plans for that day! We want to have several decentralized actions in the week before the 27th all over Germany and then a central day of action in Berlin and Frankfurt to make our demand for debt cancellation for the Global South heard to enable a self-determined and just transition. This is why we need you.

In the following, we will explain the background and how you can contribute. You can also come to one of our info calls, where these things will be explained in detail and where you will have the opportunity to ask questions. The calls will all be identical.

Feel free to share this message with other people and groups that might be interested, so that many people can get on board for this important date for debt cancellation!

What is Debt for Climate?

We are a grassroots, Global South-driven initiative connecting social & climate justice struggles by uniting labor, social, feminist, Indigenous resistance and climate movements from the Global South & North toward a common goal of turning debt-trap diplomacy on its head by canceling the debt of the countries, which have been impoverished by centuries of neo/colonial exploitation, so that they can afford to leave fossil fuels in the ground and finance a self-determined and just transition.

Debt for Climate Germany, as a regional sub-group, was formed by individuals from various movements at the end of last year who connected through the actions which took place in the name of Debt for Climate in Germany last year.

Why is February 27th so important?

February 27th 2023 will be the 70th anniversary of Germany's debt cancellation after the Second World War, as agreed upon in the London agreement of 1953, which partially led to the country's "Economic Miracle". In that agreement, over half of all of the debt Germany owed from before, during and after WWII was cancelled! And yet today Germany sits at the negotiation tables as a major boycotteur with some of the same countries that allowed Germany's debt to be relieved and today are highly indebted themselves. The main reason why we don't see this kind of debt cancellation happening today for the Global South is neocolonialism, which exerts a lot of its power through debt.

On this day, February 27th, we will remind everyone that cancelling debt is possible, and that not doing it right now for the Global South to allow for a just and self-determined transition to happen, is a political decision.

What is being planned?

Actions will take place in many different countries around the world on this day to pose the question: Debt Cancellation - Possible for Germany in 1953, not possible for the Global South today?! In Germany, we are planning a week of decentralized actions all over the country that will culminate in one centralized day of action in Berlin and Frankfurt on the 27th of February.

In Berlin, we will hold a rally in front of the Ministry of Finance on Feb. 27th from 11am to 1pm to hold German minister of finance Christian Lindner accountable for his promise to cancel the debt of the Global South and cast light on his hypocrisy. We will hear speeches from MAPA (Most Affected People and Areas) activists from some of the signatory countries of the London Agreement who call for Germany to pay its climate debt. In the evening, we are organizing a workshop where you can get to know Debt for Climate and some of its co-founders more personally and learn more about our demands.

The goal of the actions is to put our main message "Debt Cancellation - Possible for Germany in 1953, not possible for the Global South today?!" out there in many different and creative ways.

How can you contribute?

You and your group can support the central action in Berlin and/or do a decentralized action the week before. Either way the best way to learn more about how to contribute is visiting one of our info calls (29.01. at 7pm and 09.02. at 7pm here: https://lecture.senfcall.de/mar-epz-ehl-sb5) where we will explain everything more in-depth and where you can get in touch with us and ask questions.

If you can't make it to one of the info calls and want to contribute, it would be best if you message us directly at Deutschland@debtforclimate.org or via social media (https://twitter.com/Debt4ClimateDE or https://www.instagram.com/debtforclimatede/)

For the decentralized actions we will also upload some materials soon that will be helpful for doing your own actions here: https://tinyurl.com/debtforclimate2702

The main idea of the decentralized actions is to get the slogan "Debt Cancellation - Possible for Germany in 1953, not possible for the Global South today?!" out there in any way you like. For example, with a projection, a banner drop, a rally or an adbusting.

More information about the campaign: